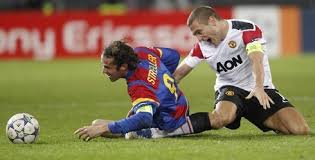 Winter is usually a time where we tend to see an increase in knee injuries, especially knee ligament injuries. This is largely thanks to the variety of ‘change of direction’ sports that are played during this time of year. Rugby league, union, AFL, netball, soccer and skiing are all sports that are multidirectional and/or have contact involved with huge forces going through the knee joint.

The aim of this blog is to take you through the four major knee ligaments, their roles, how they might get injured and how long you might be on the sideline if you are unlucky enough to find yourself nursing one of these.

We’ll start with the big one and the one that can quickly end your favourite sports star’s season. The ACL’s role is essential to stop you shin from coming forward and medially (internally) rotating. It’s important as it plays a huge stabilising role in your knee. Often the ACL is actually injuries in a non-contact scenario  such as pivoting,  landing, or changing direction but can also occur (must less likely) in a contact situation. ACL tears will often result in a person needing to undergo surgery which will see them out of non-contact sports for 6-9 months and contact sports for 12 + months. Rehab plays a vital role to strengthen the graft (replacement ligament) and ensure full recovery. More on this in a latter blog.

The PCL’s role is essentially the reverse of the ACL,working to prevent backwards and lateral (external) rotation of the shin. It is much less frequently injured than the ACL and typically comes from contact where a direct blow occurs on the shin in a bent knee position. They can also occur when the knee is forcefully hyperextended. Generally PCL injuries are treated non-operatively with a comprehensive rehabilitation program, More severe injuries can sometimes be placed in a brace for the first two weeks. Isolated PCL tears, even if completely torn, have good non-surgical outcomes despite some ongoing laxity. They will however sideline an athlete for 6-8 weeks. If a PCL is combined with damage to other structures or if significant instability is present surgical reconstruction might be appropriate.

Probably the least common knee ligament to be injured is your LCL.  The LCL’s role in the knee is stabilise the outside of the knee. Injuries to the LCL are usually due to a direct and forceful lateral stress (contact injury) to the knee. Complete tears will often be associated with other injuries (often PCL rupture) and will result in the need for surgery. Incomplete tears may require a period of bracing if severe enough, however the majority shouldn’t. A specific rehabilitation period will be required nevertheless but it shouldn’t see you out of action more than 6 weeks.

MCL injuries are common in the rugby codes. The MCL’s role is to stabilise the inside of the knee. Injuries here occur when there is a medial force to the knee and can occur in both contact and non-contact incidents. More often they are treated non-operatively, however there will be a period of bracing that can last from 6-10 weeks depending on the severity of the tear. For mild injuries bracing may not be required. All people suffering an MCL injury will need a strengthening program and modified training to reduce stress on the healing ligament. Many will return to sport with supportive strapping.

The extent of the damage to a ligament will significantly impact the management and recovery time. Rehabilitation, strengthening and activity modifications are going to be necessary in all forms of these injuries and play a vital role in return to play as well as  reducing the risk of re-occurrence. The best thing you can do is make sure you get a diagnosis and start on the road to recovery as soon as possible. As physio’s we have a variety of tests that we can do to determine the integrity of these ligaments. An MRI may be required in cases where surgical intervention may be necessary but your physio may also suggest a scan to assess other structures within the knee that can also be damaged.

Em & Nick are both experienced in dealing with acute knee ligament injuries. If you have any questions or have an injury you would like assessed feel free to contact us to make an appointment.